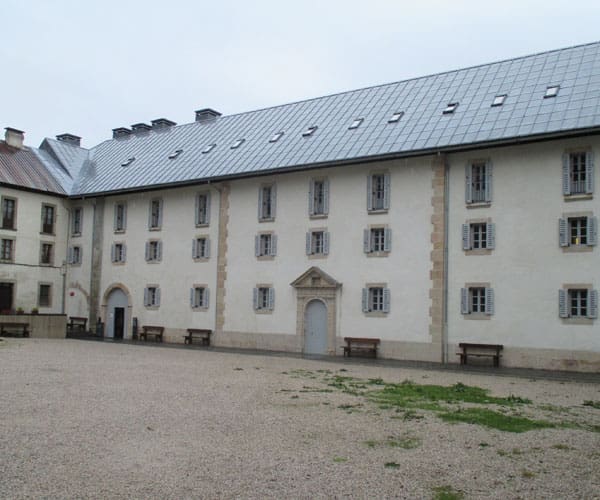 Roncesvalles and the Ibaneta pass is the traditional site of the Battle of Roncesvalles (August 15, 778), in which the Basques ambushed and totally wiped out the rear guard of the Frankish army. Roncesvalles has many historical buildings and churches to visit and a great starting point on your Camino.

On the Roncesvalles to Santiago route, you walk westward through towns, cities, and villages that are centuries old with their own history, culinary delights, and culture.

Pamplona is filled with an abundance of history, culture, and food. Tapas are known as pinchos in the Basque country and northern Spain is plentiful at many bars and restaurants. Pamplona is also famous worldwide for the running of the bulls during the San Fermín Festival, which is held annually from July 6 to July 14. This festival was brought to literary renown with the 1926 publication of Ernest Hemingway’s novel The Sun Also Rises. Hemingway spent hours writing his novel at the art deco Cafe Iruna just off the main plaza del Castillo.

Pamplona is one of Spain’s greenest cities and a former bastion of the Roman Empire, and is just as much worth a visit during the remaining fifty weeks of the year for its history and modern art museums, for its open recreational spaces, and its glorious religious monuments. The route from Pamplona to Burgos is of rolling hills with some steep ascents and descents that lead you into the city of Burgos with a population of over 355,000 people.

While in Burgos, the home of El Cid, we suggest visiting the world-class Museum of Human Evolution and the breathtaking World Heritage Site Burgos Gothic Cathedral (bring your pilgrim credentials for a discount. NO packs allowed.) along with dozens of other must-see medieval historical sites and museums. The nightlife is vibrant and the cuisine exquisite. This city offers lots of places to rest, watch the world go by, and explore the culture and history before you head west.  If you do decide to do a bit of retail therapy you can mail your purchases ahead to Santiago for a small fee via the Correos (post office).

Once you leave Burgos you will find yourself in the Meseta and the quiet countryside with fields of agriculture for as far as the eyes can see. You will walk through interesting towns like Castrojeriz, Boadilla del Camino, Fromista, Villacazar, Sahagun, and Mansilla to mention a few. While the Meseta is known for its long days and flat terrain there are some steep but mostly soft rolling hills and lots of beauty along the way.

You will pass through Leon which is a former Roman military garrison and base for its VIIth Legion. Leon is both historical and modern and home to over 130,000 people. After leaving Leon and before reaching Santiago de Compostela you will encounter many rolling hills on the way to Hospital de Orbigo, Astorga, Castrillo de Polvarzares, and Rabinal de Camino. The terrain changes to some steep hills approaching Foncebadon, Ponferrada, Cacabelos, and Villafranca del Bierzo before heading up into the western mountain range into O’Cebriero. After descending the mountains and before reaching Santiago, Samos, Sarria, Portomarin, and Melide have their own traditions, historical significance, and beauty.

Your journey from Roncesvalles to Santiago now ends and in Santiago you will have plenty to do.  To get your Compostella you will need to go to the Pilgrims Office and show your credentials with a minimum of one stamp per day.  It is highly recommended to attend the pilgrims mass at the Cathedral, explore it’s beauty and visit the tomb of St. James.   You might be fortunate to run in to pilgrims you have  met along the way while sitting in the plaza overlooking the cathedral.

You just walked across Spain from Roncesvalles to Santiago and it is a big feet.  Congratulations, you should be very proud of yourself.

If time allows there are lots of historical sites, restaurants and tapas bars to explore and the pinchos/tapas are fantastic in Santiago.  There are also buses with Monbus that will take you to Finisterre and or Muxia to the end of the world which is highly recommended.