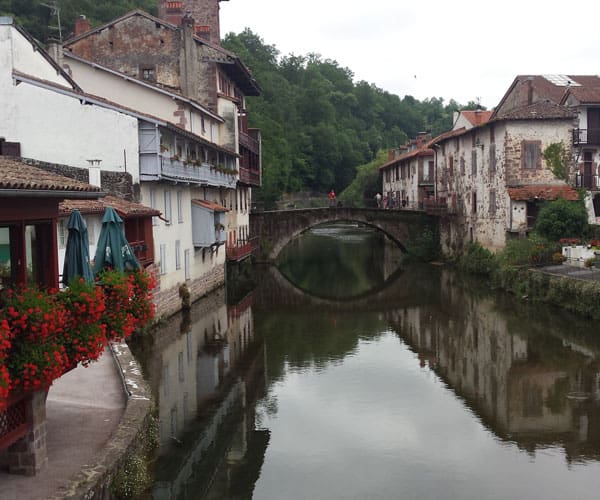 Saint Jean Pied de Port to Santiago is the Camino Frances and the most popular of the Camino routes.  Pilgrims from throughout the world choose Saint Jean Pied de Port as their starting point if they intend on walking the entire Camino. It offers various terrain from the Pyrenees mountains in eastern Spain to the high Meseta in central Spain to the mountains where the cool Atlantic air hits the western mountain range.

SJPDP is a lovely French town that is the starting point of the Camino Frances.  It leads you over the Pyrennes mountains in the southeast of France where you will cross into Spain at the font commemorated to Roland before descending into Roncesvalles.  CAUTION check with the Pilgrims Office before heading out over the Pyrenees. If fog is in the the forecast then it may be recommended to take an alternative route to Roncesvalles via Valcarlos.

Once you leave Burgos you will find yourself in the Meseta and quiet countryside with fields of agriculture for as far as the eyes can see and walk through interesting towns like Castrojeriz, Boadilla del Camino, Fromista, Villacazar, Sahagun and Mansilla to mention a few. While the Meseta is known for its long days and flat terrain there are some steep but mostly soft rolling hills and lots of beauty along the way.

You will pass through Leon which is a former Roman military garrison and base for its VIIth Legion.  Leon is both historical and modern and home to over 130,000 people.  After leaving Leon and before reaching Santiago de Compostela you will encounter many rolling hills on the way to Hospital de Orbigo, Astorga, Castrillo de Polvarzares, and Rabinal del Camino.  The terrain changes to some steep hills approaching Foncebadon, Ponferrada, Cacabelos, and Villafranca del Bierzo before heading up into the mountain range into O’Cebriero.  After descending the mountains and before reaching Santiago, Samos, Sarria, Portomarin, and Melide have their own traditions, historical significance and beauty.

This route from Saint Jean Pied de Port to Santiago can be done from 33 to 40  days depending on your desired daily average kilometres, rest days and sightseeing choices.